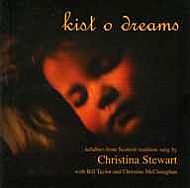 To download individual tracks or the whole album, click on the album cover to the right and go to iTunes.

To order a copy of the album, select BUY A CD on the left-hand menu.

The songs are also available as sheet music.

To listen to an individual lullaby, click on the name of the lullaby below:

The songs selected for kist o dreams are personal choices based on my own experiences from home - lullabies I loved as a child and ones which work well with my own children.  I have not made any attempt to provide an exhaustive anthology or even a particularly representative collection.  Scottish lullabies fall roughly into three categories

•songs which were written as lullabies to make some other point, such as social comment

•songs which were never intended to be lullabies, but have become adopted into the genre

Most of the songs I have chosen to include come from the first category, with a couple of examples from the third.  kist o dreams is not an academic exercise, it is intended primarily as a resource for parents and carers who want to sing to their children, and this was the basis on which the choices were made.  Other songs were not included on the CD for differing reasons; for example the Bressay Lullaby appears on Lynn Morrison's Cave of Gold album, Griogal Cridhe is a little too dark in its content, and so on.

The versions of the songs given in kist o dreams are the ones I sing.  Most of these lullabies have other versions and some have a plethora.  In some instances I am aware that the version here lacks the edge of other versions, such as when the mother finds the baby at the end of the Fairy Lullaby.  Stick with whatever version suits you personally.

Making the songs your own

In the past song collectors like Walter Scott and Marjory Kennedy Fraser have been criticised for tidying up and prettying up traditional songs, producing what they believed were improved and more acceptible arrangements of traditional songs, but historically, singers used a variety of phrases and lines when they sang a song, sometimes not singing the same text twice, but sticking with the overall meaning and shape of a song. This is particularly apparant in ballads and waulking songs. Don't feel remotely guilty about personalising a song or slotting in a few lines of your own, you'll be part of a long tradition.

The only song in this collection which is still under copyright is The Miner's Lullaby (copyright Harmony Music).