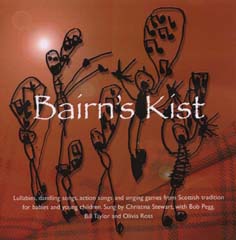 There are no CD copies of Bairn's Kist available at the moment, although occasionally, copies do come up on Amazon.

CD copies come complete with full words, translations where necessary and ideas for parents and playleaders on how to use the songs.  If you download a copy, you can request a scanned copy of the leaflet direct from me.

Songs in the Bairn's Kist collection were chosen as much for the actions and games which go with them as for the songs themselves.  All are traditional songs, with the exception of "The Hullo Song" which is based on an activity used by Alpha Munro in her sessions for children getting to grips with instruments.  The melody is traditional, though - "Bonnie Tammie Scoular" from Orkney fiddle tradition.

You can see from the notes in the leaflet that I have put my own actions to some of the songs and adapted them to fit the purpose of group singing with toddlers here and there.  I have no doubt every singer will have their own take on what actions could be used and which will suit the age group they are catering for.

Actress Ashley Jensen is teaching her son to speak Scots - at less than a year old.

The Los Angeles-based star has confessed she is so terrified of son Francis Jonathan developing an American accent that she plays him a CD of Scottish lullabies.

Ashley, 40, who got her big US break in Ugly Betty, said her English actor husband Terence Beesley was bemused at first - but now happily sings along.

Ashley, from Annan, Dumfriesshire, said: "I play my baby Scottish lullabies so hopefully he can develop the accent.

"The CD is called Bairn's Kist. My husband used to look at me weird when I was playing it, but now he ends up singing it in a Scottish accent.

"My family back home are very pleased about that."

Ashley also admits that she and Terence are homesick and are considering moving back to the UK now her latest show has been cancelled.

Bosses decided not to make another series of the comedy Accidentally On Purpose, despite Ashley receiving rave reviews for her own performance.

Christina's thoughts on the songs

When Highland Pre-school Services (now expanded and renamed the Care and Learning Alliance) approached me to lead an ambitious project using traditional songs in toddler groups, I leapt at the chance to revisit all those favourite songs.

The project meant working with 40 groups of children under the age of three and their parents and introducing them to songs from Scottish tradition.

It has given me the opportunity to record the Bairn's Kist, a resource CD full of songs which parents and other carers can use at home or with toddler groups, a follow-up to my compilation of lullabies from Scottish tradition, kist o dreams.

Research proved to be pleasure from beginning to end. I first turned my attention to the singing games we played in the playground when I was at school in Inverness.

"Underneath the Arches" was a regular feature in the infants' playground (for primaries one and two) where we had a large shelter with iron pillars. We formed a long chain holding hands and the child at one end wrapped their arm round one of the pillars. The child at the other end led all the rest under the arm of the child nearest the pillar until one by one every child was twisted round and facing the other way. The aim was to be as tied up in knots as possible.

With babies and very young children, this is a good song for carer and baby rolling, assuming the adults are willing and the floor is suitable.  Village Halls can be pretty variable in that respect.

In recent years, I have found out that in other playgrounds the children played the long chain game while singing "The Big Ship Sails". That song was another we sang, but we danced a grand chain, in a circle, to it. With the wee ones, though, I don't ask them to try the grand chain, instead we dance round in a circle, which is quite technical enough for under threes!

Having said that, they are certainly capable of simple clapping games and one of the songs I am including is "A Sailor went to Sea", which is also known as "My Father went to Sea". Once we moved up to the Big School (primaries 3 to 7, ages 8 to 11) we sang a quite few clapping songs, the aim being to get faster and faster, usually in pairs, but sometimes in a circle.

There were also some songs which had no specific game attached, like "The World Must be Coming to an End", where the singer apparently breaks pretty much every bone in their body, verse by verse, until they finally turn into a ghost, and all for the sake of going for the 'messages'!

Not all the songs on the Bairns' Kist come from the playground. I have accumulated songs from all sorts of sources. "I had a Wee Hen" is a charming song about different farm animals in which the list of animals, and imitations of their noises, gets longer and longer as the singers think of them, in a similar way to "Old MacDonald had a Farm". I picked up this song from the School of Scottish Studies' Journal, "Tocher", published from a field recording of Scottish traveller tradition.

I first learned "Kittie Berdo" in the popular "Katie Bairdie" version, as a beginner's harp tune over a decade ago. My friend Corrina Hewat was teaching it to her class at the residential Feis Rois traditional music course in Gairloch. Bill Taylor, who plays harp on the CD, brought me the version we eventually recorded, which he came across in Orkney.

The "Gille Beag o" which appears on this CD contrasts with the one which I recorded on the lullaby CD Kist o Dreams and is another which Bill has contributed. This is a favourite in the toddler workshops with a good bit of 'baby swinging' and dancing going on.

There are some songs which are familiar from childhood and it can be hard to pinpoint exactly where you learned them. The "3 Craws" is one of which I was aware, but not one I knew well enough to sing, that is, until the Merry Dancers Martinmas Festival a couple of years ago. The festival is a celebration of traditional storytelling, but I had been invited to sing at a ceilidh. It was storyteller Janet MacInnes from Alness who sang me the "3 Craws" as an aside during the evening. It always proves a great hit with children of all ages, not to mention the adults.

No collection of Scottish children's songs would be complete, however, without "Ali Bally Bee". Oddly enough, I remember this from my childhood as ending each verse with "sugar candy" rather than "Coulter's" or "Coultart's" candy, and yet the original was an early advertising jingle for this brand of sweeties.

Robert Coultart is credited with writing the original version himself to promote the aniseed-flavoured candy he made in the kitchen of his two-roomed flat in Galashiels, stamping his name on each bit. This apartment was also home to the Coultart family including four children born between 1853 and 1874. It is said that the recipe died with Robert in 1890, making one of Scotland's most famous confectionaries impossible to buy (although a Scottish company does market a re-imagined sweetie with the same name).

For the purpose of this CD and the workshops with toddler groups, I have made up "dandling"-type actions to go with this song, even although I don't know of any traditional actions.

I have had to adapt several songs and actions to suit the requirements of the project, making up actions, simple dances and games for "Brochan Lom", "Chuir iad mise Eilean leam fhin" and others.

The very first song on the CD, the "Hullo Song" combines the melody of Orkney's "Bonnie Tammie Scolla" with words based on ones which Ross-shire based musician and music therapist, Sarah Munro uses for groups of children getting to grips with instruments for the first time. I use it as a fun physical and vocal warm-up, but it is also very handy for keeping the children happy on long car journeys.

I have also been a little cavalier with the song "Aiken Drum". In some versions this has two characters, Willie Wood, whose clothes are made of food, and Aiken Drum who eats up the food, item by item. Aiken Drum plays a ladle and Willie a razor. I suspect there could be a connection between the razor which Willie (or sometimes Aiken Drum himself) plays, and the Scots word rouzar, meaning a watering can, which would make more sense in the context of something you would play as a musical instrument.

The version we recorded has only Aiken Drum and he is made up of various items you might find in a home or toddler group, such as wiggly wool for hair and a bottle cork for a nose. This is because the CD is intended as a resource for children's groups, to bring Scottish traditional material into the group with activities they can take part in as part of their normal session.

My adoption of the melody of "The Piper o Dundee" for the chorus of Aiken Drum was just for variety. These changes sit comfortably with Scotland's historic heritage of oral composition and a healthy, living tradition.

The beauty of singing to toddlers, of course, is that it is an ideal situation for adults to have fun with their children, and some of the best songs for this are "dandling" songs. These are songs which adults sing while they bounce children on their knees in various ways. They tend to be quite short songs, understandably so, when you try bouncing a child on your knee for any length of time.

Two examples on this CD are "Wee Chookie Birdie" and "Hey Jock ma Cuddy", both of which include a little surprise for the child.

At the end of the third line in "Wee Chookie Birdie", the adult opens their knees to let the child "drop" down. For "Hey Jock ma Cuddy" you cross your legs have the child straddled across your ankle while you hold their hands and bounce them up and down with your leg. On the last word, "bite!", you give an extra high bounce.

Traditionally, dandling is a way a grandparent, uncle or other family relative can entertain a child while the parents are taking care of other work, as well as a way parents can play with young children. In addition to entertaining the child, these songs and actions can help them with muscle development and balance, give them a feeling for rhythm, help them get to grips with language and speech sounds, and introduce them to elements of traditional Scottish culture.

There is a great deal of pleasure to be gained from sharing these songs with other parents and their children. It is especially rewarding to see the children asking for a song over and over again, just as we loved to sing and play the same songs when I was just a wee thing myself!